How to fix SA's unemployment crisis 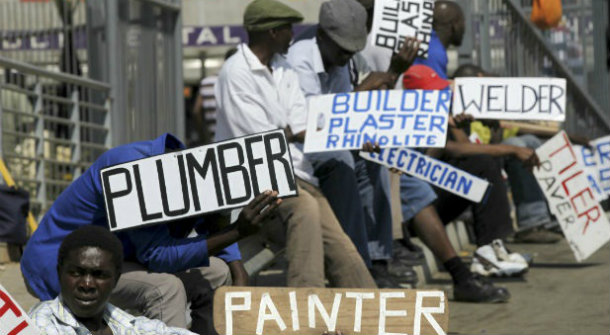 We are suffering the enormous consequences of a harsh and bitterly cold labour environment in . Already 9.3 million people who are looking for jobs can’t find any. Over 60% of our youth are unemployed. And our government is in the process of making conditions even more unbearable.

If I were the Labour Minister, I would carefully rethink the entire labour policy, especially on small businesses. A good start would be to encourage businesses in townships to start employing neighbours, friends and colleagues. The easiest way to do this would be to create economic zones within each township and to have a deregulated environment, effectively absolving small black business in the townships from the Labour Relations Act. Obviously, the Basic Conditions of Employment Act would still apply as safety and security is a vital right of each employee.

Coalition politics could be a major boon for the economy, as most of the business community are not interested in politics, but are looking for a stable atmosphere that is conducive to development.

Although there are some businesses who do well in a shaky economy and who thrive on economic risk, the majority of small businesses merely want a situation where there is no interference and very little regulation.

Yet the Minister of Labour insists on stricter and harsher regulations for almost every sphere of the employment relationship. These regulations not only act as a handbrake to job creation, but also lead to enormous expense when an employee decides to challenge a dismissal or any other type of industrial relations action.

The very fact that we are discussing a national minimum wage shows the recklessness of the system. Our Treasury has said, conservatively, that a national minimum wage would create a further loss of 700,000 jobs. We also know that the business community has gone on an investment strike and that the majority of their profits are being invested elsewhere.

Businesses are voting with their feet. They are refusing to invest monies into their own businesses, which would in turn create more jobs. The only businesses that are investing in today are those that are mechanising, resulting in jobless growth.

Obviously, the fewer labour laws and the less regulatory authority, the better the system will be. We all know and understand that we want to avoid the environment that was created by the apartheid system. We also want to avoid “sweat shops” and unhealthy situations in the workplace. The bottom line should be the proper implementation of the Basic Conditions of Employment Act, but a complete deregulation of many of the systems contained in the Labour Relations Act.

The hiring and firing mechanisms should be completely loosened. We should enable businesses to dismiss more freely when it comes to productivity and issues like non-performance, theft and absenteeism etc.

Small businesses do not have the resources, time and funds to develop human resource departments or to access industrial relations practitioners and lawyers. In my experience, a small business would rather not employ if it meant having to adhere to the plethora of labour laws and regulations that exist in the wintery climate created by the legislature.

Businesses themselves obviously are aware of the urgent need to create jobs. If the sentiment from government indicated in any way that it wanted to support businesses, and in particular small businesses, there would be a radical swing around.


The markets at the moment are fickle and each piece of bad news merely reinforces the negative business sentiment. We have recently seen how the Chinese economy has been able to create 10 million new jobs in just 10 months.  Business sentiment in is robust, active and forward-looking.  Exactly the opposite of what we have experienced in .

-By Michael Bagraim, DA MP and Shadow Minister of Labour.
This article does not necessarily reflect the views of TMTV.
Image credits: africanbusinessreview.co.za, parliament.gov.za