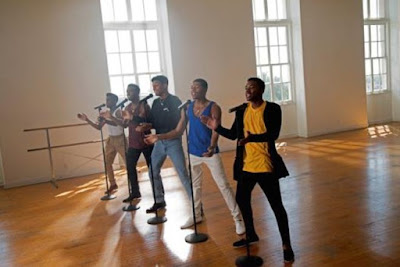 After 30 years of breaking hearts on albums and stages, New Edition finally gets the biopic that their stellar tenure in entertainment so richly deserves. This epic three-part miniseries follows the group from their humble beginnings as kids in Boston to global mega-stardom — weathering the highs and lows of controversy, personal challenges, and the ultimate cost of fame.
The star-filled The New Edition Story cast includes: Bryshere Y. Gray, Elijah Kelley, Luke James, Keith Powers, Algee Smith, Woody McClain, Dante Hoagland, Caleb McLaughlin, Jahi Winston, Myles Truitt and Tyler Williams as New Edition, alongside La La Anthony, Yvette Nicole Brown, Monica Calhoun, Lisa Nicole Carson, Sandi McCree Wood Harris, Michael Rapaport, Faizon Love, Duane Martin Tank and Bre-Z.
The New Edition Story will air as an exclusive six-hour, three-night event on 23 February, 2 March and 9 March at 21:00 CAT on BET (DStv Channel 129).
THE NEW EDITION STORY: EPISODE BREAKDOWN
Part One – premieres Thursday 23 February at 21:00 CAT
The year is 1978. The city: Roxbury, Massachusetts, just outside of Boston. Eleven-year-old Bobby Brown convinces some friends (Ricky Bell, Mike Bivins, and Ralph Tresvant) to perform in local talent shows in an attempt to win money (and girls). Once the group is formed, they convince a hot local manager, Brooke Payne, to turn them into talent show winners. The boys are eventually discovered by music impresario, Maurice Starr, who signs them to a record deal. They add a fifth member, Ronnie DeVoe, and their debut song “Candy Girl” hits #1 on the charts. Gary Evans, a manager from NYC, promises them a better deal, bigger stardom, and more money. When the boys get a new deal with MCA Records in L.A., things get off to an inauspicious start when MCA president Jheryl Busby, underwhelmed by his new signing, pushes them to deliver a hit album or else.
Part Two – premieres Thursday 2 March at 21:00 CAT
It’s 1984, and New Edition is in L.A. recording their second album. Ralph, fully aware of the resentment from his bandmates, requests more parts for them to sing. The album is a huge hit; but Bobby’s behaviour gets more erratic and outlandish while on the road. Eventually tensions erupt, and the group dynamic takes a pivotal change – the boys vote to kick Bobby out – and New Edition is never the same. Soon Ralph decides that he wants to go solo, leaving remaining members Ricky, Mike and Ronnie stunned. Mike, the group’s de facto leader, adds R&B singer Johnny Gill to the group. Everything comes to an ugly head when the group meets to record their next album.
Part Three – premieres Thursday 9 March at 21:00 CAT
New Edition’s “Heartbreak” tour is an incredible success and the group is soaring high. Bobby, who has his own hit album “Don’t Be Cruel”, starts off as their opening act. But he soon eclipses them, becoming one of the biggest stars in R&B music. By 1990, all the members have launched hugely successful solo careers — even though there’s tension bubbling under the surface between them. A few short years later, when most of the guys are up to their ears in debt, they agree to do a reunion album and tour with all six members, including Bobby. This should be New Edition’s rebirth, but things immediately get off to a bad start. In the aftermath, all six members go their separate ways, trying to navigate life after New Edition, leaving little hope of maintaining the brotherhood they once shared.
For further information on The New Edition Story, please go to http://www.betafrica.tv, follow BET on Twitter and Instagram @BET_Africa or on Facebook at http://www.Facebook.com/BETinAfrica