Beyoncé lends her voice to International Day of the Girl film 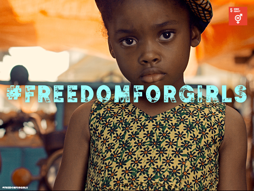 The Global Goals, agreed to by world leaders in 2015, include a commitment to achieve gender equality and empower all women and girls by 2030 – Global Goal 5.

To mark International Day of the Girl on the 11th October, Project Everyone (the organisation behind the Global Goals campaign) in partnership with UNICEF and the Bill & Melinda Gates Foundation has teamed up with director MJ Delaney to produce a new film featuring the song Freedom by Beyoncé.

If the Global Goals are to be met, these challenges must be solved:
The film spotlights these issues and asks the public to share and tell the world what #FreedomForGirls means to them. They can also support a diverse range of global and grassroots organisations:  BeyGood4Burundi, CHIME FOR CHANGE, Donor Direct Action, Equality Now, Freedom United, Girls Not Brides, Global Citizen, The ONE Campaign, Plan International, Save the Children, UNAIDS, UNICEF, With and For Girls.

The film is released just weeks after the first ever Goalkeepers event hosted by Bill and Melinda Gates in New York City in September 2017. Goalkeepers featured speakers including President Obama, Prime Minister Trudeau and leading women’s rights campaigners including Nobel Laureates Leymah Gbowee and Malala Yousafzai. It featured new commitments to support women’s and girls’ movements around the world and called for an acceleration in progress towards gender equality.

Speaking on the release of the film Melinda Gates, co-chair of the Bill & Melinda Gates Foundation, said: “I believe that empowered girls transform societies. Their future is filled with possibility, but continued progress is not inevitable. Millions of girls still face barriers to their health, education and prosperity, just because they are female. But I’m hopeful because I’ve met so many girls who are already fighting for change in their communities. They know that an equal world is a greater world, for everyone, and this film reflects their spirit and determination.”

#FreedomForGirls follows the 2016 Global Goals film #WhatIReallyReallyWant, also directed by MJ Delaney, which received over 200 million aggregated views and had a host of influential supporters.

MJ Delaney, director of #FreedomforGirls and #WhatIReallyReallyWant, said: “Last year’s film, which focused on women, was joyful, playful and optimistic. The global political landscape has changed dramatically in the last year – a warm celebration of female solidarity is no longer enough.

“This year’s film is defiant and demands change, with much younger girls giving a voice to a whole generation of little girls for whom it’s imperative that the Global Goals are met by 2030. Last year we marked the twentieth anniversary of Girl Power. This year we’re celebrating a new and different generation of powerful girls, using the protest anthem of the moment, Beyoncé’s Freedom - because what we need now is action.”