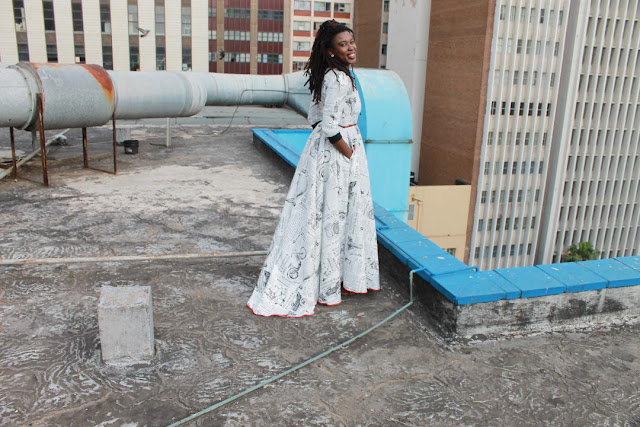 Simthandile Mtolo is a gypsy. Not the kind who travels from place to place, but from genre. Simtha is a singer, actress, television presenter, entrepreneur, designer and arts activist.

Simtha currently hosts Hosanna, a Christian programme on SABC 2. She also features in some commercials, and can still be spotted in the Stylin’ Dredz adverts, among other things.

The bubbly young entertainer is also in the early stages of opening an all-KZN music store to collect music and archive the various music styles hidden in KwaZulu-Natal.

Simtha has over a decade of experience in the live entertainment industry as a professional performer and live entertainment specialist. She began her career in the 11th grade at Kingsway High School, where she landed her first role in the musical Oliver, directed by the late Themi Venturas, and staged at the Elizabeth Sneddon Theatre in 2004.

Simtha continued the following year with Fiddler on the Roof, and continued onto greater stages as she grew into a young adult. She made it her thing to land great support and leading roles in productions such as My Fairlady (2009 - The Playhouse Company), Man Of La Mancha (2010- Grahmstown Arts Festival Main Stage), and more recently Mashu The Musical (2015 - The Playhouse Company).

Simtha grew up in a Christian family and, like most children, the church offered her first performing opportunities and audiences. Coming from a family that loved music, she slowly found her own interests and voice in ballads, jazz and soul music.

As if music and acting weren’t enough, Simtha has also been very fond of creating pieces with her hands. She has since been someone who enjoys creating and designing, and often shows her skills in the events she puts together.

Simtha studied as a music student at UKZN’s school of music between 2006 and 2007 but discontinued her studies to pursue a more “practical career” which she felt would allow her to include all her interests without limitation, simultaneously creating new opportunities that could aid in moulding the local creative industry from where it was, to where she hoped, and still works towards taking it to.

Through the years, Simtha performed as a musician on small, corporate and festival stages. She was a part of The Fifa Fan Parks, has done The Durban Business Fair Gala Dinner, The Hazelmere Dam Jazz Festival, Nivea, 31 Club and Transnet events, as well as a multitude of private events.

In 2015 Simtha was awarded the 1st prize for East Coast Radio’s Be The Band Competition, which gave her the chance to share a stage with Prime Circle, Thandiswa Mazwai and Mafikizolo, to name but a couple.

In all her performances, Simtha has been very busy with her business Ebonygypsy, which generally creates productions that merge multiple disciplines to provide working opportunities for the magnitude of authentic artists from KZN.  These productions and concepts offer entertainment for the general public through shopping centre entertainment, as well as shows in various venues.

Events Township Jazz Society is one of her successful shows which tour KZN townships, featuring a five-piece undiluted jazz band line-up. Another exciting production that has done well over the years is A Woman, A Hat, A Bag, And Her Belly, which is an annual women’s celebratory show. This show merges dance, music, poetry and the pregnant ladies that are invited to be a part of the performance.

Simtha believes in creating something great from nothing, and often invites other artists to bask in the possibilities of the local industry with her through song, dialogue, and partnership. Often she will go live and interact with her friends and followers on social media, offering a free performance on Facebook. Simtha is a very relaxed fun character who enjoys companionable interaction, who ever is watching.