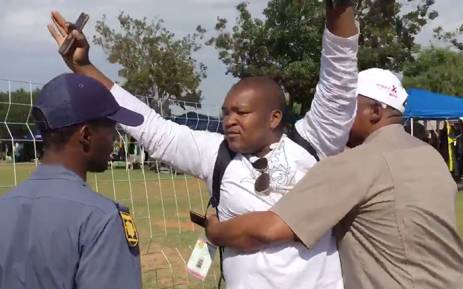 The ANC’s 54th national conference was predictably filled with drama. Spare a thought for the journalists who tried to bring every twist and turn of the soapie – while many important sessions were closed to them.

Here is a look at some of the media moments that defined the conference, which took place from Saturday at the Nasrec Expo Centre in Soweto.

Two days before the conference started, hundreds of SABC staff went on strike, threatening the broadcaster’s ability to bring this major political event to millions of South Africans. The stoppage followed months of wage negotiations, during which management refused to budge on workers’ demand for an increase. But after it emerged that interim board members had collected a R3.9 million cheque, it was difficult for the SABC to use its struggling finances as an excuse not to pay an annual increase. The potential conference blackout could also have been a factor in the SABC’s decision to backtrack. The day that the conference started, a breakthrough was announced. The SABC would pay workers a backdated 4.8% increase. Crisis averted.

‘Why are you even here?’ Clashing with Collen

Don’t cross eNCA’s Uveka Rangappa. ANC Youth League President Collen Maine learned that the hard way when he tried to take on the seasoned news anchor during an interview.
Maine had been brought into the studio to discuss the ANC conference, but used the opportunity to have a go at the media.
“Why are you even here?” Rangappa chirped after Maine took several digs at the press.
Watch the clip at the following link: ANC Youth League President takes a swipe at media

There had to be at least ONE faux pas during such a high-pressure event. That award goes to TimesLIVE, which prematurely reported that Cyril Ramaphosa had won the race for the presidency of the ANC on Saturday night – way before voting had even started. The news outlet explained that its reporter had misunderstood comments made by ANC chairperson Baleka Mbete when she endorsed Ramaphosa.
See the TimesLIVE apology here: Apology: Mbete's endorsement of Ramaphosa was not party decision

The Sunday Independent nailed its colours to the mast when it urged conference delegates to vote with their conscience and elect Nkosazana Dlamini-Zuma as president. The endorsement did not go over well when City Press journalist Andisiwe Makinana posted it on Twitter.

The difficulties facing journalists at the conference were highlighted when Bloomberg correspondent Sam Mkokeli was kicked out after apparently complaining about waiting 45 minutes in the sun for Cyril Ramaphosa.
Mkokeli was roughed up by a policeman after he asked to be escorted to the media venue, instead of continuing to wait for Ramaphosa.
The incident prompted many other journalists to come forward with their complaints about ill treatment by security officials. The ANC promised to address the complaints and Mkokeli was eventually allowed back into the event.