Slikour and Stogie T honour best verses of the year 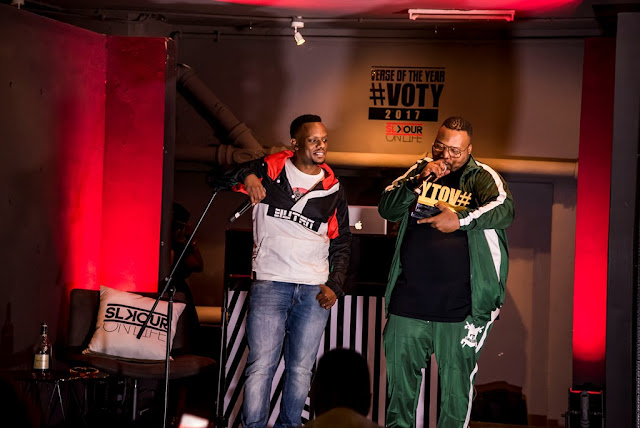 The genius of rap is in the verses, in the poetry and the images that the lyrics depict – and this genius was celebrated at the first-ever 2017 Rap Verse of the Year Awards event hosted by SlikourOnLife and created by renowned veteran rapper and poet, Tumi ‘Stogie T’ Molekane.
The awards ceremony was held on 8 February in Braamfontein at Untitled, a club in Braamfontein owned by DJs Kenzhero and Bionic, and was partnered by Hennessy Cognac.

For the past year, the popular SlikourOnLife urban music website has featured a ‘verse of the month’ show by Stogie T where he evaluates and rates the best, latest hip-hop music verses, achieving a viewership of between 10 000 and 12 000 per month. It’s these songs, these verses, that were in the running for the 2017 Verse of the Year Awards.

Says Molekane, “We have all heard a rapper perform magic on a beat, express experiences so personal and private you felt like a sibling, or depict stories so outrageously far-fetched that you wonder if you share the same air. This enchantment comes from trained sorcerers, masters of form, rhythm, quip, wit, and cadence – those who turn the mundane into something else. The Verse of the Year is a tribute to the countless hours spent in front of an empty page or a silent mic making shit up. Who best to honour than the people who translate life for us or make the unattainable a click away.”

Siya Metane, well-known in the hip-hop music industry as Slikour of SlikourOnLife, says Stogie T started this as a yearly social media concept and he trusted us to make it a monthly online webisode that’s now given birth to this possible annual event where lyricism is awarded with a plaque.

“We believe that the lyrics are core to rap music, and the best wordplay, story-telling, and lyricism must be celebrated. Every month we have been impressed at the genius in the words of the rap songs – and we believe that an event that takes our digital platform live and credits what our young writers are producing will add value to their work and bring greater recognition to the genre as a whole.”

If we don’t do it who will?